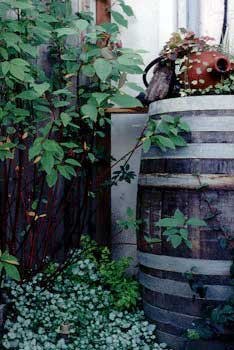 Granny Artemis & Paghat the Ratgirl live on a high hilltop in a working-class neighborhood overlooking Sinclair Inlet of Puget Sound. In the 1870s the settlement was called Charlestown, today called "the old Charlestown neighborhood." Our Edwardian era home was a humble orchard grower's house a century ago, but by today's standard it's a mini-mansion. It's certainly a wonderful place for two eccentric gals to ramble around in.

Although the property is small, we've managed to create gardens that we love, adding much to what was here when we bought the place before the new millenium.

When Granny Artemis suggested documenting the garden, I hadn't used a camera for a few years because mine needed a battery &, you know, procrastination. But Granny Artemis had a sudden inspiration in Autumn of 2001 & got us started taking pictures. We started with a pretty high quality Pentax that I'd had for a couple decades, but in 2003 we got a digital camera, in a few years after that an even better digital one. We're not excellent photographers, but just about anyone can get a few cool pictures if enough shots are taken.

The plan from the start was to have woodland gardens completely encircling the house. We've mostly achieved that. As trees & shrubs grow, we have more & more the pleasing illusion that we live in the woods, even though we don't.

New pages are added regularly, depending entirely on whether or not we've succeeded in getting good enough photographs of a given element of the garden. At the end of 2002, when the Garden website first moved to its own website domain, there were about 750 garden photographs for 300 articles about different plants throughout our gardens, these being accessible from the Garden Indexes & from the navigation bar at the bottom of every page. By the start of 2005 there were about 600 gardening articles, & over 2,500 plant & garden photographs. By the middle of 2009, in spite of a hiatus for health reasons, there were about 1,600 articles & 3,500 photographs.

Most of the pages are exclusively about our humble garden. But in 2004 I began doing landscaping & gardening work for friends. This work on extensive gardens provided elaborate possibilities for expansions. So I began documenting some plants I was caring for elsewhere than in Granny Artemis's & my garden. It wasn't a big stretch as I had already been documenting some neighborhood shrubs & trees I saw each day walking Daigoro.

As we approach a decade playing with our gardens, there've been many changes. For a long time I treated every plant like a pet animal, responsible for its continued existence even if it turned out to be kind of a disappointing plant for whatever reasons. After a few years, though, I became a little hard-harted, & if I wanted to replace some stuff, I give it long careful thought so as not to be entirely callous, but if I decide it'll be an improvement, I will give away or compost stuff that hasn't delighted me sufficiently &am preplace it with something I like better. So not all the plants documented here are still present, though as often as possible I like to update articles for a "final chapter" on what happened to stuff we had for a while.

There's also just no such thing as "finishing" a garden & saying, "there, that'll last forever." The garden also imposes its own changes. Gardens for "bright shade" plants get darker & darker as three-foot shrubs reach ten feet or larger; or allegedly dwarf trees shoot up to twenty-five feet or bigger.

This caused some shade perennials to fade away for want of any light at all. As we didn't want to resort to a hosta garden (the one plant guaranteed to thrive in increasingly dark conditions) we eventually "elevated" the gardens, meaning trees were underlimbed, shrubs that were ten or more feet tall also got underlimbed to look more like small trees, & where fences didn't let in enough side-light, we installed huge windows in the fences. As the ground-level became airier with more dappled light getting in, the shade-gardens revived better than ever.

Over time this gardening website has become rather useful as a reference source, with special value for the Pacific Northwest or in expressing the care of plants that grow nicely in USDA Zone 8 (Sunset 5). It in fact appears to be the the largest temperate gardening website in the world.